When you pitch a show, you hope that the person you’re pitching to will not only love your idea, but help you nurture it. After all, you’re not just looking for a creative outlet: you’re looking for someone who can and will help guide the success of your property. Give you personal feedback on it. Work with you to make it the best it can be.

Greg Alkalay is that person. And batteryPOP is that outlet.

CMA spoke with Greg on Tuesday, November 4 and he was incredibly generous. Like, told us to send him resumes generous (seriously: keep reading!). More accessible than almost any other exec you’ll meet, Greg was a ball of energy and encouragement for the CMA crowd.

And we loved every minute!

Moderated by the awesome Kristen McGregor, Greg opened up and shared everything he knew about this business – which, it turned out, was quite a lot. For starters, he’s got skin in this game: he began his career as a PA for independent films. He worked ridiculously hard for no pay and nothing he worked on ever saw the light of day. Thankfully, he landed a PA gig at Nickelodeon and that turned into a 12-year career. That he loved (“Nick is a great place for people starting in the industry,” he gushed).  He eventually found himself Head Writer for On-Air Promos and assigned to the Super Bumpers team, who made original content to fill commercial breaks. It was crazy and creative and he discovered he had a lot of fun with short-form content. And when it resonated with kids, he “knew that format had an opportunity to live outside Nickelodeon.”

Thus batteryPOP began. Inspired by all of the great content that wasn’t getting onto Nick (or anywhere else) and knowing that kids would love it, he decided to make a place for it to live. One where creators retain all rights to their shows until the end of time, and kids would be able to choose which programs they watch – and which ones get developed. Thankfully kids were starting to migrate to the digital space so he ran with his idea and never looked back. Even though being an entrepreneur was super hard.  “Lonely. Nowhere to go,” were his exact words, actually. Eventually he and his co-founder grabbed some office space and started reaching out… and people started agreeing to host their content on his fledgling online platform. Almost immediately. “People liked what we were doing,” he said, still somewhat surprised. 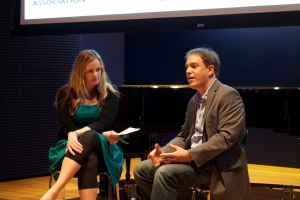 Kristen can’t believe how surprised he is

Kristen confirmed this, adding that in her career as an independent producer she never got to keep her own rights. She loved batteryPOP because it was amendable to independent creators. Greg added that the batteryPOP team never wanted to a creator to not be happy giving the show to the platform – and backed that up by pointing out his contracts guy and saying, “if we’ve got 100 different creators on the site, we’ve got 100 different contracts.”

One of the advantages batteryPOP has is that it does everything in its power to be a safe space for kids online. It’s doing its best to meet COPPA standards by asking kids for an age, a gender, and having them create a username with an adjective and a noun – all with their parents permission, of course. batteryPOP also curates its content, openly soliciting feedback from its viewership on what it’s doing. “It’s called batteryPOP because kids are in charge of what’s popular,” Greg explained. “It’s not just click and watch; it’s click and engage.” The goal is to make kids development execs – and turn viewers into fans.  “There’s no reason kids can’t be development execs,” Kristen pointed out, and Greg agreed – and said something profound: “TV development is many things, but what it doesn’t do is open up to the audience it’s intended for.”

Having worked in television development, this never occurred to me. And it is absolutely true.  The fact that batteryPOP is not only aware of that but actively trying to fix it makes it something special.

Does that mean batteryPOP has it all figured out? Not quite. For starters, they still need funding. “We have a revenue plan,” Greg shared. They’re going after advertiser supporting as well as VC funds, and have even started moving into branded content. We got to see a clip of something they’re working on with Harper Collins and it was a TON of fun. Also informative (mashed bananas + grape jelly = perfect zombie brains makeup.  Try it!). They’re having lots of fun helping brands connect with their kid audiences in better, more authentic ways – but the real goal of these partnerships is pitching the creators on batteryPOP to brands. Which is yet another example of the personal touch they offer that no other network does. 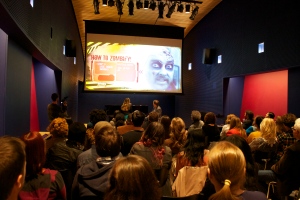 Greg added that since batteryPOP is on the brink of growing they’re hoping to scale the staff very soon. One of the best lessons he’s learned is the value of working with the right people – and one of those people could be you! He is absolutely open to looking at resumes, and you should send him one (again, almost anything at batteryPOP.com will go to him. Pick something fun!).

batteryPOP is built on the idea that web series are the future of kids’ programming, and that idea led to a robust Q&A session. In it, we learned that the audience finding batteryPOP is 6-11, 6-12 – and that’s mostly through parents.  They had a show about ants that was beautifully drawn but lacked a clear main character, and now that Greg’s all obsessed with character he knows why it didn’t do as well as he’d hoped. Greg also admitted that while his own creative sensibilities may be reflected in the content, he and the rest of team batteryPOP really do want kids to tell them what they want to see – and that means, they’re open to EVERYTHING. Sports shows, serious documentaries, goofy cartoons, STEM shows (they have a few now, and are open to more as long as they’re good), you name it. They want to see it. And let the kids watching tell them if it’s good.

Here are some other awesome things we talked about that I didn’t know where else to stick:

In short, batteryPOP is a great place to pitch. They’re the future of kids content.

You should do that. And send them your resume.