On March 22nd, CMA hosted Movers and Shakers: Women in Children’s TV, in honor of Women’s History Month. Moderated by Lynne McVeigh, a professor at New York University’s Tisch School of the Arts, the evening posed various questions to an esteemed panel on how they have navigated the children’s media space and how they see a more female-inclusive workspace affecting the future of children’s media.

McVeigh started the evening with an inquiry into what challenges our panelists have faced in their career, and how they overcame adversity in the workplace. Stacey Greenberger, a writer on Nick Jr’s Blaze and the Monster Machines, noted how her years as a junior writer were difficult when it came to finding her voice in a room of established writers. Feeling like she had no voice in the room, Greenberger spoke up to 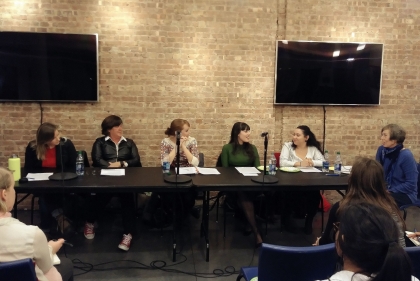 the head writer and found that a one-on-one conversation gave way to her feeling more welcomed to vocalizing her thoughts in the writer’s room. Lauren Muir, the current VP Creative Director of Nickelodeon’s Preschool Brand Creative team, shared that her early days in reality TV gave way to a situation where she was asked to stand in for an on-screen role in a show she was producing. Muir admitted that the request made her uncomfortable but she nearly went along with it. While she was able rework a different solution for the production, she later realized how unprofessional and unfair the request was, and wished she would have been quicker to shutdown a request that so unfairly put her on the spot. Heather Tilert, a kid’s media producer and creator, added that her experiences with sexual harassment had proven to be an obstacle in her career, given the lack of awareness and safe spaces for reporting such behavior. Tilert went on to encourage attendees to speak up if they felt like they were in any kind of scenario that raised red flags or felt uncomfortable.

The conversation continued with McVeigh posing the question of whether “Girl Power” is really happening in children’s media. Paulina Orozco, a Production Coordinator also on Blaze and the Monster Machines, noted that the Blaze series has girl appeal despite seemingly being marketed to boys. Orozco said that the show has seen great appeal with female audiences and that appeal has even greater potential for growth as the writer’s room has become majority female. Muir added that greater awareness of gender themes plays a big part in how boys and girls own their identity, but that comes with being conscious of the portrayal of characters from early on in the process and not allowing preconceived gender norms to impact the stories we want to tell.

On a similar note, McVeigh went on to discuss diversity within children’s media. She asked what can and should be done to bring forth more inclusivity both within the workplace and on air. Ginger Brown, an executive producer and content creator, suggested that we need more modeling of diversity in the content that we create, and only then can we cultivate a more accurate representation of the real world in media. Muir added that change also needs to happen within the workplace in how roles are staffed. She had seen how authentic and thoughtful casting and staffing has led to better results and feedback within her projects. Tilert shared this thinking and expanded on it by discussing the role of LGBTQ representation in children’s media and nodded to a Kid Screen Panel (audio link to the panel can be heard here) on the subject, and how the panel more extensively addressed the need for more content for kids that fairly represents positive programming with LGBTQ characters in upfront roles.

The night covered a number of topics across the women in children’s media spectrum, in addition to an insightful Q&A session at the end. You can log in to our CMA portal to watch the full-length video of this event and many others!

One thought on “Movers and Shakers: Women in Children’s TV”