The evening kicked off with CMA’s perennial Red Chair host Amy Friedman, Founder and President of Redhead Consulting and CMA Board Member, sharing how the Red Chair Series came to be from her former offices at Nickelodeon to the stage where she has shared several exciting sit-downs with our industry’s top names.  Friedman’s time at Nickelodeon brought her to meet our speaker, Brown Johnson. There, Johnson pioneered preschool programming in a big way by piloting many of the household names we know today.

Friedman opened the event with brief instructions on how it all works: She spends 20 minutes on life, 20 minutes on work, and takes 20 minutes of questions from the audience. And with that, we were off to races! 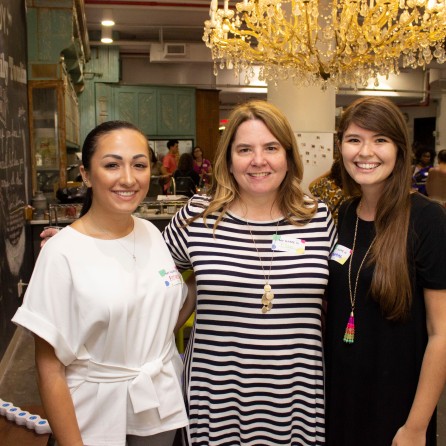 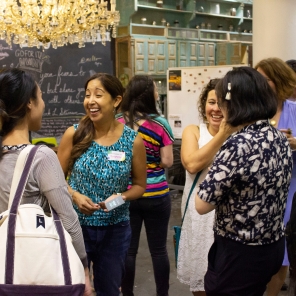 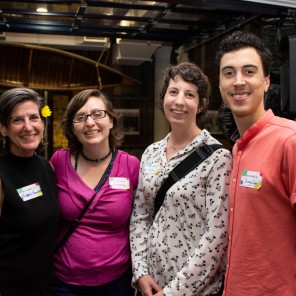 Brown Johnson grew up in Huntington, Long Island as the youngest of four. With her father as the head of an all-girls boarding school, it was only natural that Johnson would also attend school away from home. Choosing to study in Massachusetts, Johnson found the school environment to be thrilling. With the “boy crazy element” subtracted from the experience, she found most of her conversations to be intellectual and the education she received to be rigorous. In the end, she found that her time away made her more resilient, and now in the midst of the #MeToo movement, she has found her voice to have great value in rooms where women are often ignored by their male counterparts.

After her boarding school years, Johnson found herself taking a gap year and working as a “gal Friday” (aka an office worker). After working for several design and architecture firms, Johnson eventually found herself at Nickelodeon. On one of her first days at Nick, she was thrown into action on a scouting adventure, via helicopter, for the network’s classic show Hey Dude. But the best was yet to come. Johnson convinced the network to give her team $60 million dollars to fund the beginnings of a brand that could expand into greater marketing and sales opportunities. That brainchild was Nick Jr. Through this new venture, Johnson realized something very special: the power of “yes”. In granting more yes’s than no’s, Johnson found that the brand creatively flourished and individuals felt empowered in their work.

Then came Blue’s Clues. Most of us would imagine that the wholesome beginnings of our beloved blue pup may have started in a conference room in a New York high rise, but it turns out Blue’s Clues actually came to be in a mobile home in Orlando, Florida. While working with Peter Schreck on a remedial learning device, Johnson found through testing that children really enjoyed being helpful. Together, they developed the project into Peter Penguin, a pilot where children helped Peter Penguin get from point A to point B. As the team grew, with Angela Santomero (then in the research department at Nick) on board, the project was molded into its final product. Initially named “Blueprints,” it was eventually renamed Blue’s Clues. When the pilot was tested in front of kids, Johnson saw the responsiveness of preschoolers, and knew in her gut that Blue’s Clues would be a hit.

Next came Dora the Explorer. Seeing a lack of diversity in children’s media at the time, Johnson felt that they needed to broaden their base. What she didn’t expect was how much children around the world would identify with Dora and her look. Today, inclusion has become a keyword in conversations around all media, but the conversation was much different when Dora premiered. Johnson admitted that they did make mistakes in the beginning, but it was something they learned from and, in the end, getting diversity and inclusion right depends on sharing the concept of “different but the same”.

After immense success at Nickelodeon, Johnson eventually left slime for puppets when she made the move to Sesame Workshop. As a consultant, Johnson found her way by being open and frank about her point of view on how the company was working together and coming up with new ideas for Sesame Street.

And as if Friedman was reading our minds, she asked Johnson to address the move of Sesame Street to HBO. As we imagined, the shake-up was also controversial on the inside. At first look, there were questions about how moving the show to HBO would benefit homes that were watching Big Bird and friends via public access television, but Johnson reminded us that the deal meets the needs of both Sesame Workshop and PBS. HBO and other partners will allow Sesame Workshop to meet full production costs, while PBS still receives past aired episodes nine months down the road.

Capping off the one-on-one portion of the conversation, Johnson showcased a teaser reel for season 49 of Sesame Street and a sizzle reel for Sesame Workshop’s new animated series, Esme and Roy, which is due to premiere on HBO on August 18th.

For those who had read the program carefully, you would know that we had a special guest in the house: Matt Vogel, Lead Puppeteer at Sesame Workshop. But what happened next was a complete surprise to everyone. A familiar voice broke from the back of the room, and it was…COUNTING?! IT. WAS.THE COUNT! Naturally, people applauded and cheered as Vogel and The Count took to the stage to join the chat. Friedman and The Count bantered back and forth, as The Count attempted to decide on his favorite number. Vogel eventually came out from behind The Count to discuss his journey to Sesame Street, his current role as Lead Puppeteer, and his time puppeting Big Bird, Kermit, and other Muppets.

The night was filled with laughter, stories, and some the most inspiring dialogue on how we interact within our industry, as well as the importance of creative freedom. This is a must watch video for anyone who loves Nickelodeon, Sesame Street, and this amazing industry in which we get to work. Log in to your CMA member account to watch and enjoy: https://childrensmediaassociation.org/event-video-and-livestreams