This was a members-only event, so if you’re not already a member and your interest is piqued, consider joining CMA!

Leslie and Andy talked about a variety of subjects, including how they got their start in their careers, the publishing process, and trends in children’s publishing.

How did Leslie get into children’s publishing?

Soon after Leslie graduated from college at Notre Dame, she enrolled in the Columbia Publishing Course, a summer program for recent grads and career-changers. From there, she was hired as an intern at Little, Brown five years ago – and she’s been there ever since!

How did Andy get into the children’s bookstore business?

Andy’s father was “fanatical about bookstores” and passed on a love of bookstores to him. Of course, there used to be a lot more bookstores, Andy noted – although we’re actually in a bookstore renaissance! In the last five years, the number of bookstores across the country has grown.

In college, Andy was involved in children’s theater; he loved playing children’s storybook characters. After college, he worked at a Chicago branch of B. Dalton Booksellers, fell in love with his boss, and they left B. Dalton to open their own bookstore: The Children’s Bookstore.

Andy then became the Founding Manager of the bookshop of The Eric Carle Museum. In 2012, Andy took over the Bank Street Bookstore, which was first founded in 1970.

Andy pointed out that there’s no formal training for learning how to open or manage a bookstore. That being said, Andy published his IPPY Award-winning book Rebel Bookseller: Why Indie Businesses Represent Everything You Want to Fight for—from Free Speech to Buying Local to Building Communities, about the history and values of independent bookstores and how you can open your own independent bookstore. 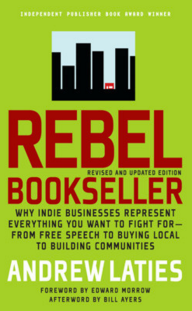 Andy’s main advice: “If you want to open a bookstore, find out where there is need – it can be done!”

What is the process from an idea to publication?

Little, Brown solicits manuscripts from agents only, which is standard practice in publishing.

An editor at Little, Brown will make a pitch, which includes comparable titles currently on the market as well as a profit/loss statement, in addition to the story concept. Once Little, Brown acquires the manuscript, it goes through several rounds of edits. The design team also works closely with the author on the book’s overall design, which includes cover design, font, and chapter headings.

Then there’s the question of the book launch. Will the launch include school tours? Paid ads? Publishing hardcover and paperback simultaneously, which is a current trend, or the traditional roll-out of paperback first, then hardcover.

Advance Reader Copies, or “ARCS,” are sent out to bookstores, which is where Andy comes in. Andy meets with sales reps from publishing houses, and also uses Edelweiss, a digital platform by Above the Treeline to research trends in children’s book sales. Andy places book orders in February, and books arrive at the bookstore in July.

What are some current trends in children’s book publishing?

Andy discussed how the depiction of girls in children’s books has gone through several transformations. It used to be that the prevailing school of thought was to write exclusively male protagonists because girls were willing to read books about boys, but not vice versa. Then, when Andy was first starting out, the American Girl and The Babysitters Club brands were becoming huge – both feature dynamic female characters.

Then, a backlash. A few years ago, Andy started getting parents asking for books for a “girly girl,” which confounded him – he joked that he had never even heard that phrase before! This was the princess era: Fancy Nancy, Pinkalicious, and, of course, Frozen.

In the last few years, there has been yet another backlash, this time against princess culture and celebrating girls in math and science.

There is now also a strong push towards diversity: racial and gender diversity, including transgender characters, characters with disabilities, and other types of diversity.

Leslie also cited The Fault in Our Stars author John Green’s influence in establishing the current trend of realistic, emotional fiction. And we can’t forget about the influence of YouTube: Little, Brown and others are publishing memoirs, lifestyle guides, and other publications by YouTube celebrities.

There’s also significant growth both in non-fiction and adaptations for young people. The popularity of Little, Brown’s Young Readers edition of I Am Malala is a great example of both trends. This edition includes maps, photos and other learning tools to engage young readers. 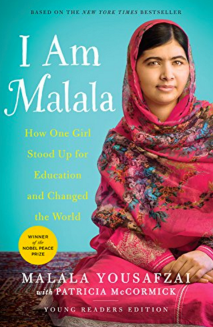 Leslie also commented on the effect “binge-watching” television shows has had on the publication process. Young people now commonly “binge-read” serialized books, which means that the publication timeline is now on an accelerated schedule.

Last but not least, Andy commented on the current baby boom that we’re experiencing, which means that there is an incredible demand for books for very young readers.

What subjects or styles would you like to see more of in children’s book publishing?

Andy strongly wants to see more books advocating children’s personal agency, since right now there are very few books available about children as activists. Andy’s longtime favorite book in this genre is The Streets are Free, by Kurusa.

The Streets are Free is a Venezuelan import about a group of children who live in the barrios of Caracas. The children want a playground but the local government only makes empty promises. So the children mobilize their community and work together to achieve their goal.

Andy noted that fiction or non-fiction books for young people about revolutions besides the American Revolution are few and far between. He speculated that these kind of books don’t get published much in the U.S. because of a fear of rebellion – schools aren’t necessarily interested in these books because they give children a large amount of personal agency, which can be perceived as threatening.

Leslie noted that since the market is so saturated right now with realistic, emotional fiction, she would love to read more humor, light-hearted stories, and historical fiction.

How do you make appropriate age-based recommendations for a child?

Our own Lauren Camadeco asked this question, noting that she recently worked with a young child who was reading Ron Chernow’s Alexander Hamilton after seeing Lin-Manuel Miranda’s groundbreaking musical Hamilton, which was famously inspired by Chernow’s book.

Interest determines reading level. If a child is really interested in a subject and if there’s a book that’s too difficult for that child, that doesn’t mean you shouldn’t get that book for that child. The child will make an effort. Maybe you have to read it aloud to the child, or maybe the child will interact with the captions of the photographs. You just don’t know. So I never tell people, “Don’t get this book because it’s too difficult for a child.”

And with that profound and thought-provoking point, our informative evening came to a close.

For events like these, and much more, including events on children’s television and digital media, consider joining CMA if you’re not already a member!

Hello! I am a playwright and aspiring writer for children's television! MFA NYU-Tisch School of the Arts. View all posts by Jaclyn Perlmutter