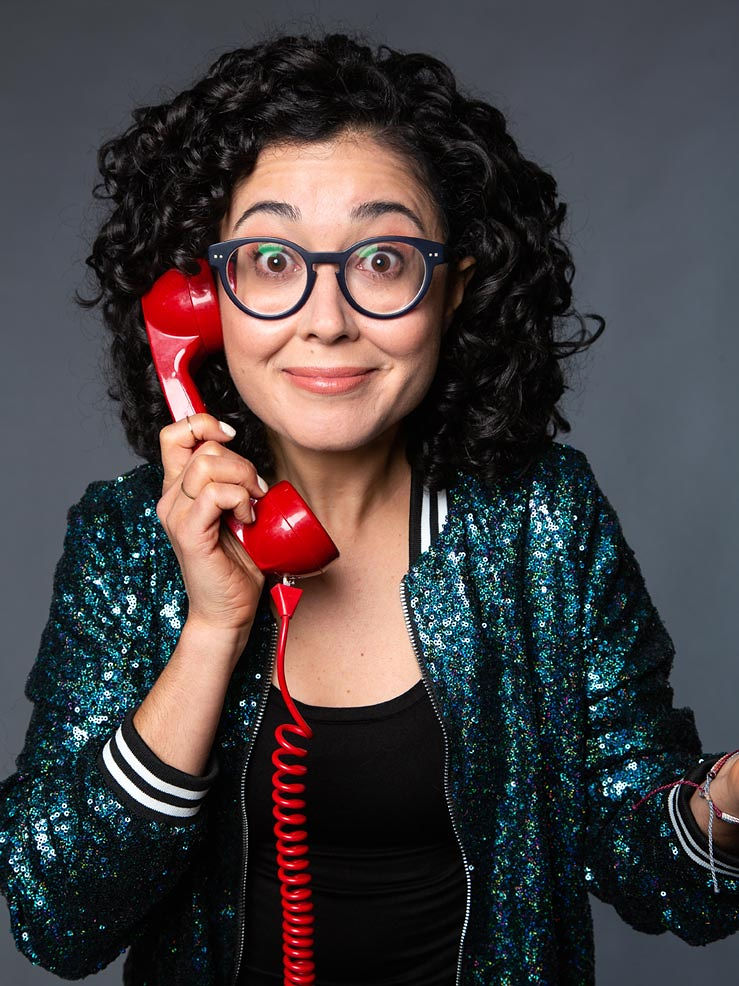 Meet Carly! Her journey in children’s television began in 2012 when she was hired as a host and writer for Sprout’s Sunny Side Up, a live morning show for preschoolers. She created original interstitial content every week for five years – it was a fast-paced, 360० immersion into kids’ media. And right now, you can find her on Universal Kids as the host of Snug’s House, The Big Fun Crafty Show and Get Up and Move!

As a musician, she’s written songs for Sprout/Universal Kids that have garnered thousands of views on YouTube, and she’s a vocalist and songwriter on the Grammy Award winning Children’s Album HOME by Tim Kubart. Listen for her as the host of Don’t Break the Rules, Pinna’s award-winning improv-comedy podcast for kids. Carly is a trained actor (Northwestern University) and improvisor (iO, Second City), experienced early childhood/elementary school educator, DJ (Radio Disney) and storyteller (Moth Story Slam winner, featured storyteller on NPR’s Invisibilia). As both a performer and content creator, she meets her audience right where they are and keeps things just the right amount of weird. She’s a high-energy performer, an enthusiastic collaborator and an advocate for resilience. Her work combines authenticity, comedy, curriculum and surprise. When she isn’t creating stuff for kids, she’s boxing, making theatre with old college pals and waking up very early (it’s the best time of day)!

Tell us about your journey to being in front of the camera/mic in kids content.

I graduated from college with a theatre degree and those first few years after school, I was living in Chicago and working as an actor. Most of my side gigs (I had SO MANY) involved kids. I was an event DJ for Radio Disney, played weekly sets of family music around town, and taught classes at an early childhood education center called Bubbles Academy (run by fellow CMA member Tamara Nolte!).

One day, my agent called me with an audition for a live preschool morning TV show and I remember thinking it was a shockingly perfect combination of all the jobs I already had. I got the part and joined the Sunny Side Up team on Sprout as a host and writer. The show was a live interstitial that linked the themes of the shows airing every morning on Sprout with sketches, songs, recipes and games presented by Chica the Chicken and a (human) host. We made tons of original content on a very fast turnaround and performed it live every week. It was essentially a grad degree in kids media. I’m so grateful for that experience. And from there I’ve been able to keep making shows and music and all kinds of stuff for kids and families.

What’s your favorite part of the job?

It’s a good good job. The best job, I’d say. As a writer and a performer, I’m always looking for ways to encourage everyone (not just kids!) to stay curious, play often and fail with joy. I feel incredibly lucky to get to do all of that with people who inspire me and challenge me. There’s nothing more magical than a big collaborative experience where you start to lose sight of who contributed what and how the thing even came to be because the creative exchange is so fluid. I LIVE FOR THAT! I love our slice of the media industry and I love making things with other people who love it too.

What are the hardest parts?

I wear many hats, I’m a true multi-hyphenate, so I usually have a few different types of creative irons in the fire. Balancing lots of different projects and creative partnerships is one of my favorite parts of my work but also for sure the most challenging.

What advice would you give to someone starting out who wants to perform for kids?

Kids are the most honest audience, and I love them for that. My advice to anyone who wants to work with kids would be to really listen to them. Don’t play to your idea of a kids, play to ACTUAL kids. Tune into your own authentic wonder and move from that place of truth. This audience is so special. They JUST got here. As kids media makers, we get the chance to make sense of the whole world. WHAT AN HONOR!

Who were your favorite performers/characters when you were a kid? Why do you think they struck a chord with you?

I’ve always loved anything with detectives. I used to watch a ton of Where in the World is Carmen San Diego. When I was 8, I recreated an entire episode in my basement with me as the host and two of my (seven) siblings as the contestants. I think that 8-year-old kid would be happy to see how things have turned out. I loved Nancy Drew, Harriet the Spy, Jessica Fletcher (Murder She Wrote), Dr. Mark Sloan (Dick Van Dyke’s character on Diagnosis Murder…CLASSIC). I was (and still am) a curious kid, and The Detective is the one of the highest expressions of curiosity!!! The whole noir/mystery world is one of my favorites to play in. On Sunny Side Up I created a recurring detective bit for Chica and me and right now I’m working on a detective project that should be in the world…eventually.

What’s one thing, industry-related or not, you learned in the last month?

I take classes whenever I can because I think activating that beginner’s mindset is a great way to stay fresh as an artist (and human). In an improv class recently, someone reminded me of the saying “invest, don’t invent”. It’s certainly useful in an improv performance setting, but it also helps me remember to stay present and connected to what’s actually happening around me. Boom boom!

What’s something about you that not many people know?

I think it might surprise some people to know that I am actually an INTROVERT! I love to bounce around and be a goof and hang with all the people, but only after I have recharged my batteries with lots of quiet time!!