When I was eight years old, I couldn’t get enough behind-the-scenes featurettes. I would be glued to the screen watching Brandy and Whitney Houston sing “Impossible” in a recording booth, or Kathryn Beaumont and Ed Wynn perform Alice in Wonderland’s Mad Tea Party for artists to sketch. It blew my mind when ZOOM on PBS had a behind the scenes episode, where I could see the kids rehearse and shoot a scene from an episode that had aired earlier. Many programs through today realize that they may be showing theater and performance to children for the first time. In honor of World Theater Day, I want to explore programs in throughout television history that have used performance to encourage agency in young people through imagination, self expression, and collaboration. 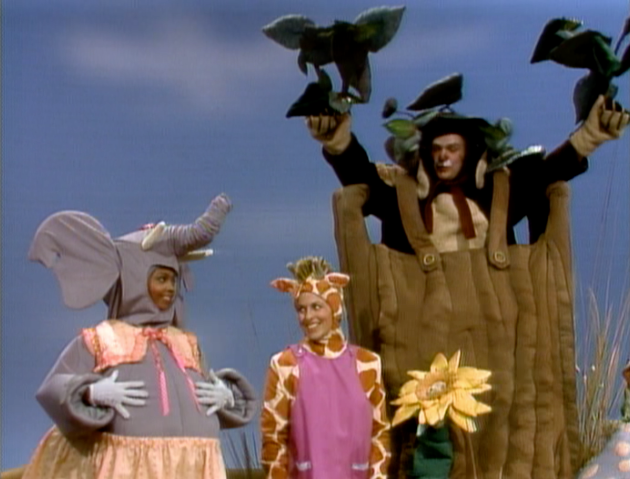 For one spring week, between 1968 and 1989 on Mister Rogers’ Neighborhood, residents of the Neighborhood of Make-Believe Neighborhood (along with some special guests) would come together to produce and perform an opera composed and written by Fred Rogers himself and orchestrated by the program’s musical director, arranger, and keyboardist, Johnny Costa. Mister Rogers wanted viewers “to understand that they can create things using their imaginations, be it a television program, a painting, or a song.”1 He wanted to show that imagination was just as real and useful a creative tool as wood, paper, or clay. Conjuring people, places, and scenarios from the imagination is a central theme of many programs. It happens almost magically in The Backyardigans and Elmo the Musical and more practically in Bubble Guppies, Out of the Box, and even The Magic Garden. In these shows, characters use costumes and props (or just their imagination!) to act out stories they like, embellish, or make up. They can take an active part in these stories, and encourage viewers to try something like it themselves.

An opera week on Mister Rogers’ Neighborhood was an entire week because the performers did not make up the operas on the spot. Instead, viewers watched them imagine their own characters and situations, combine them into one story for them to rehearse and then enjoy acting out.2 Exploring the creative process was a good way to clear away the mystery behind viewer’s favorite shows, but they still got to enjoy the magic of the finished product by the end of the week.

Knowing the process behind performance encourages agency in young viewers. Kids can do this too, either while they grow up or right now! This was much of the concept behind the GBH production ZOOM, which ran both from 1970-1978 and from 1999-2005. Not only did ZOOMers perform skits sent in by viewers, but the entire program was a product of their own creative efforts.3 They were real kids putting on a TV show with help and ideas from their audience of peers. Later shows for a similar age group mimicked this premise (which, by the way, has existed since Mickey and Judy put on a musical in many different barns) in a more structured way. Sketch comedies like All That, The Amanda Show and Keenan & Kel showcased young people performing skits that mocked and reflected issues close to their young audience.

For a younger audience, Julie’s Greenroom (2016) showcases the technical side of theater by displaying each aspect of theater production from acting to set design. Characters on the program also familiarize viewers with common theater terminology.4 The message that creating a performance is a tangible, practical, accessible skill is an empowering one. Viewers learn that they are not only recipients of content, but possible creators of it as well.

Scripted shows from iCarly and Victorious to Bizaardvark and High School Musical: The Musical: The Series depict young people working hard to create more diverse forms of performance-based content. While performances are not the only focus of these programs, they do still show ideas that viewers could look up to and recreate.

Why is it important to have agency when it comes to performance? One reason is the self-expression that performance allows. As Fred Rogers put it, “It helps children to see people dressed up in costumes, pretending, and singing their thoughts instead of saying them, knowing it’s all right to sing sad and angry songs, as well as happy, carefree ones.”1 Performing arts not only allow, but require creators and performers to access and share their emotions. When ZOOMers rapped about personal issues during ZOOMraps or when Josephine the Short Necked Giraffe sings about her fear of not making friends, they model this behavior for viewers. This might help viewers feel more comfortable accepting their deep feelings, and understand that there are constructive ways to address and express them.

Theater-based lessons often emphasize collaboration and inclusivity. Theater is for everyone, and contributions from everyone are what make it best. When each person shares their own, individual interests and passions, the result can be something better than any one of them could create alone. Further, theater is for anyone. Often, performers in the shows mentioned are untrained. The ZOOMers were prone to giggling and producers left in some of their flubs.5 Even most of the Neighborhood of Make-Believe regulars were not trained opera singers (with the exception of classically trained Francois Clemmons and the Neighborhood “resident opera singer” John Reardon.)2 None of that was a problem! Since performing is about the process and the outlet for self expression, viewers can focus on the opportunity “to try new things, not to do them with anxious care.”5

Programs that highlight what goes on behind the scenes of theater and television for young people do not only teach terms and concepts behind performances, but explore what work, collaboration, and fun goes into making those performances possible. And who knows? These programs may just be the inspiration for the next generation of performers, directors, musicians, and children’s media creators.

I'm a writer, creator, and video editor with a lifelong love of television, for grown ups and for kids. I am also a performer, poet, musician, doodler, reader, and classic television trivia enthusiast. View all posts by Martha Morton